It’s A Small World for Dogs

East meets West: Romeo, a Yorkshire Terrier with his owner Nicole who was born in Korea.

With St. Patrick’s Day coming it got me thinking that most of the dogs I meet are not Native Americans. I, for one, am a Poodle. People think we are French but we really came from Germany.  Former Secretary of State Clinton who lives in my town has a Toy Parti Poodle, Tally just like me. She and President Clinton also have a Canadian breed, Seamus, a Labrador Retriever. They are the most popular dogs in America and I can believe it  because I meet a lot of them in all colors, Black, Yellow and Chocolate.

I have met a lot of dogs from around the world walking in my town. One of the first dogs I met when I was a puppy was Gizmo, a Tri-Color Australian Shepherd. Though he was about ten times my size, Gizmo was shy at first and the most gentle and friendly dog.  He was like the mayor and made me feel right at home on the street.

Out of Egypt comes my friend Jester, the sleek and speedy Greyhound. “We are one of the oldest breeds known to man,” Jester, a former racing dog told me, “ and came to America in the 1500’s with the Spanish explorers.”

I’ve met lots of dogs from Europe: the very friendly and low-key Puffy, a Black and Gold English Spaniel and Oliver, the exuberant Yorkshire Terrier and Milo, the very affectionate cream-colored French Bulldog.  Finnegan Patrick O’Keefe, the Soft-Coated Wheaton Terrier whose name lives up to its breed’s Irish roots. Don’t be surprised when you see that handsome dog and he gives you his Wheaten greeting, playfully prancing on his hind legs and gaily showing himself off. Wheaten’s are very outgoing and self-confident that way.

And there is “Q” the Golden Retriever who romps around collecting tennis balls which is about the only thing this Scottish lad retrieves and Harry Houdini, the Wire Hair Terrier who also hails from the British Isles springing into action  around town.

And there are all the “Doodles” and “Poo’s”.  Goldendoodles like my friend Blue who, although he is not a service dog, told me that they started breeding Golden Retrievers with Poodles to create hypoallergenic dogs for visually impaired people with allergies.  Labradoodles like Taz, an Australian Labradoodle who actually flew over from Victoria, Australia via pet jet 11 years at 4 months old and was picked up by his owners at JFK cargo. And there’s Cody the Malti-Poo who is a mix of the aristocratic Maltese with the intelligent Poodle.

My neighborhood is like the United Nations. We have French Papillons with butterfly-shaped ears, Chinese Shih Tzus and  a Hungarian Vizsla, to name a few. There are two All American dogs on our block, MJ and Lucky, Boston Terriers. I did some research and found out that their breed was a Boston creation of two British dogs: English Terrier and English Bulldog.

And so globally or locally as I stroll around town greeting dogs from all over the world, no matter what our size, color or country of origin, the one thing we all have in common is we are and always will be man’s best friend and feel right at home wherever we live.

What is the country of origin of your dog? My owner says there are lots of other breeds from abroad  so you can let me know who you are.  Contact  me, Maggie Mae Pup Reporter™,  at maggiemae10514@gmail.com 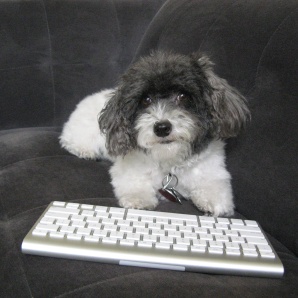 Thanks to Raphael Miranda and WNBC Sunday Today in New York, August 24 2013 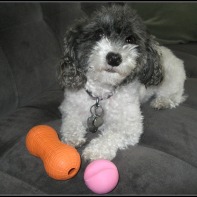 Which one to choose? Read all about my favorite toys.

My friend Riley, the Staffordshire Terrier with his “brother” Mason

Love playing in the snow!

Need to know who is coming down the road. 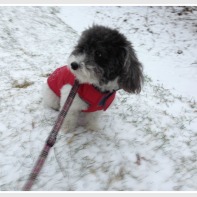